After a two week break over Christmas and the Holy nights we have started building again. Three French Wwoofers arrived on January 7th to help with the building for a few weeks. Sylvain, who was here in October with Damien, returned with two of his friends, Jonathan and Corelien, who he is studying with. It is great to have their help.

Doris and Bruno left just after the end of November and it feels empty without them. Stephen Sheen pops in regularly in the mornings to help as does Chas and Julian Ritchie came along just at the right time to help get the rafters up before Christmas. Nino has been an ongoing and tremendous help, but is now off to Australia for six weeks with his wife Annie; we wish them a marvelous time.

We are not going to start rendering the straw bales until it is a bit warmer and there is no danger of frost. We have therefore started putting up battens on the underside of the roof rafters. They will carry the weight of the small straw bales we will use in the roof and also be used to fix the 12mm magnesium oxide boards up as the ceiling. They are called Econic General Purpose Sheathing Boards and although not cheap they are fantastic fire resistant boards, are structurally strong and are very ‘eco’ having no chemicals and glues to off-gas over the next years. The battens are up and the boards will go up this coming week.

We have also started building the internal stud walls. Most of it is built using the 2”x 6” timber we earlier utilised for the shuttering of the concrete foundations. Instead of the stud-work being filled with conventional insulation and then covered with plasterboard we are intending to use ‘straw clay slip’ in between the studs and then render/plaster with clay. Basically it is straw which is given a light dressing of clay slip, which is a thin watery mix of our clay/subsoil in water. The straw is not soaked, in the sense that you should not be able to squeeze any liquid out of it, it is rather just smeared with a light coating of the paste. Once it is stuffed into the wall and dried it goes quite hard. It will become clear when you see pictures later. At this point we have just built the machine which will help us cover the straw with the clay slip.

The battens fixed to the rafters. 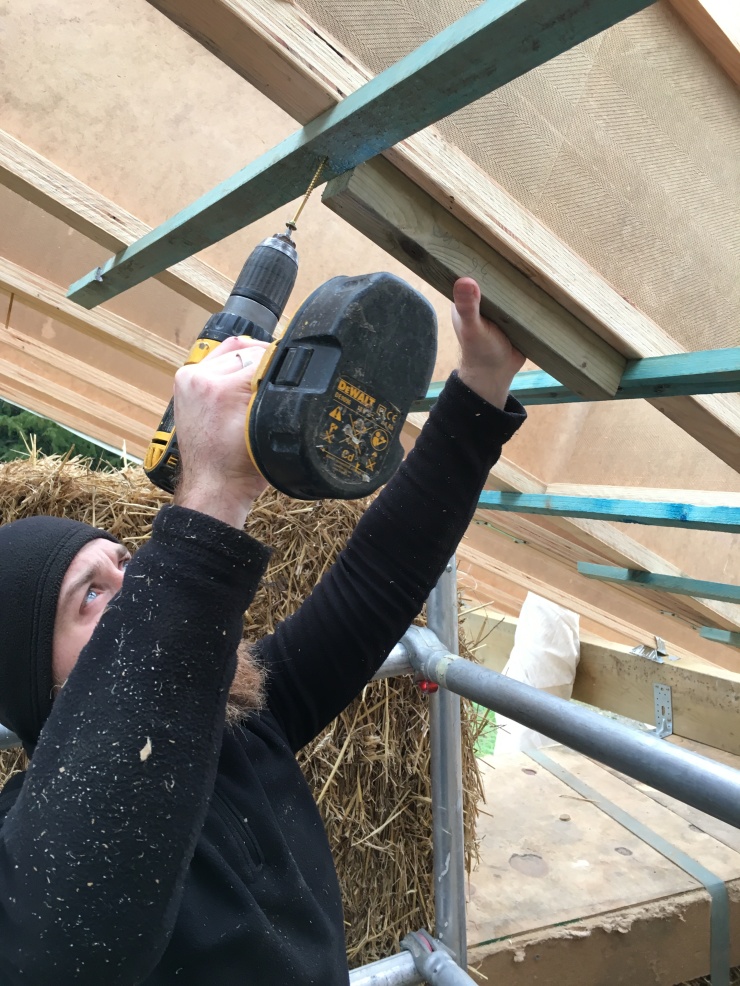 Corelien using a spacer to ensure the battens are at the right distance.

Chas putting up the first stud work. Is it a story or an explanation? 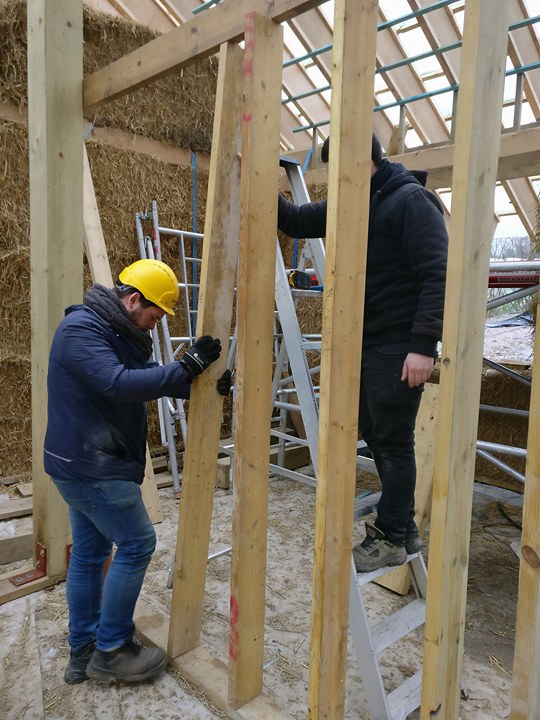 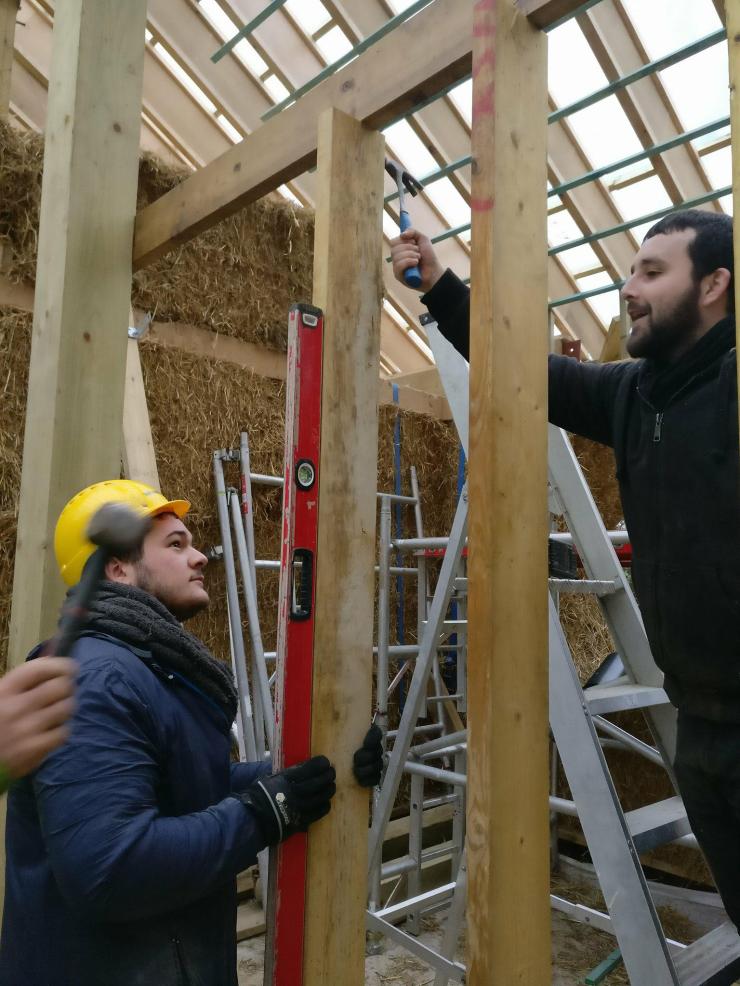 Jonathan and Sylvain getting it right.

The room is starting to take shape 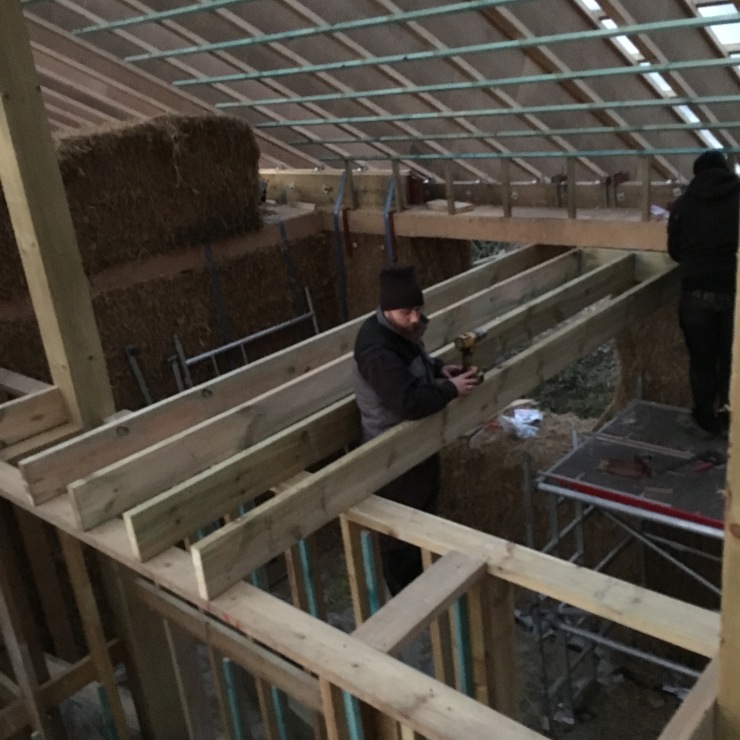 The joists going up over one of the bedrooms. There will be plenty of storage space above.

Over the window and at the entrance the joists are secured by hanging from the flitch beam above the roof plate. 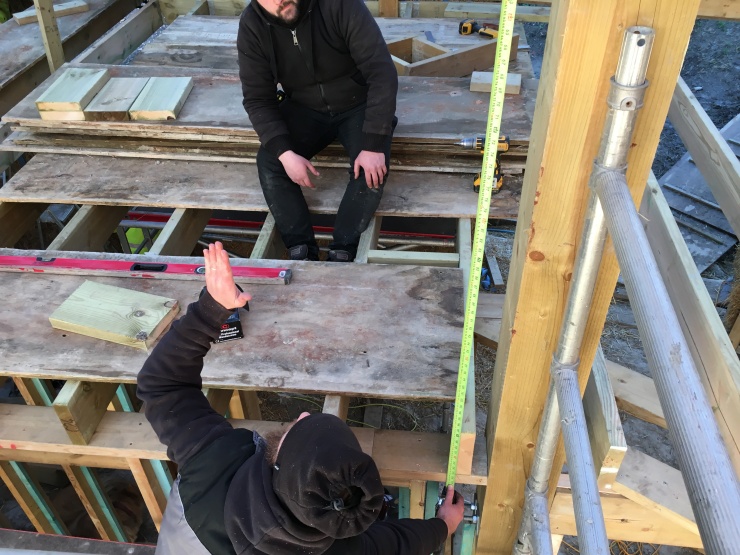 How does the next bit go? Who would build a house with such funny angles? 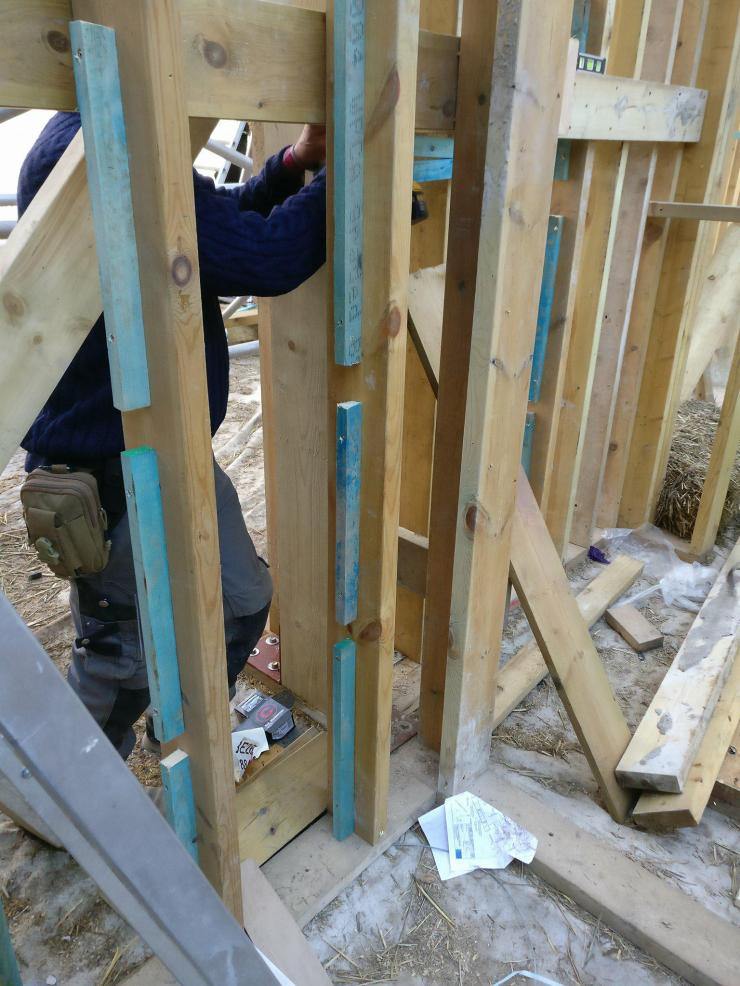 Bits of batten are screwed in-between the studwork. When the straw clay-slip is put in there they will ensure it is held firmly in position.

Wooden pegs are knocked into the straw bale so that the stud work can be secured to the bale by screwing it to the pegs.

This is the machine, which two of us built in just over a day, with the help of Terry, for mixing the straw and clay slip. It is three barrels welded together and rotated by a belt around an electric concrete mixer.

There are metal rods or ‘fingers’ fixed in the length of the drum to turn the straw.

Four wheels from Screwfix for £6 each! The belt was an old one I found on the farm! The belt is held in place by a bit of hollow pipe secured by bolts either end which can freely rotate with the belt. A kind local person is lending us the concrete mixer – which is ideal for the job.

The weight of the concrete mixer is hanging on the belt and gives it enough tension.