Before we can render the straw bales a number of things have to be done first. Firstly I am replacing the ratchet straps with high tensile wire which is tightened using fencing ‘gripples’ with the farms special tool for doing this. They will be hidden in the render when it goes on.

Then any gaps or holes between the bales need to be filled with straw, or straw and clay slip, that the insulation of the wall is not compromised. Then the bales need trimming and tidying, which I am doing with an electric chain saw. Then a clay slip, which is our subsoil dissolved in water in the concrete mixer, is sprayed onto the  straw bales. I am using a very simple sprayer, bought on the internet for £15, which works extremely well. Because it works on compressed air it blows the clay slip into the straw where it forms a good bond as it drys to enable the render, which we will put on later, to stick firmly to it. One would otherwise have to rub the slip into the straw with ones hands which would be time consuming and hard work.

Tensioning the wires using a ‘gripple’ and the special machine. The wire goes from a stainless steel rod through the foundations over the wall and back down to the rod on the other side. This also ensures strong winds cannot lift the roof off.

This is a video of the clay slip being sprayed onto the trimmed bales. It is not a difficult job using the machine. 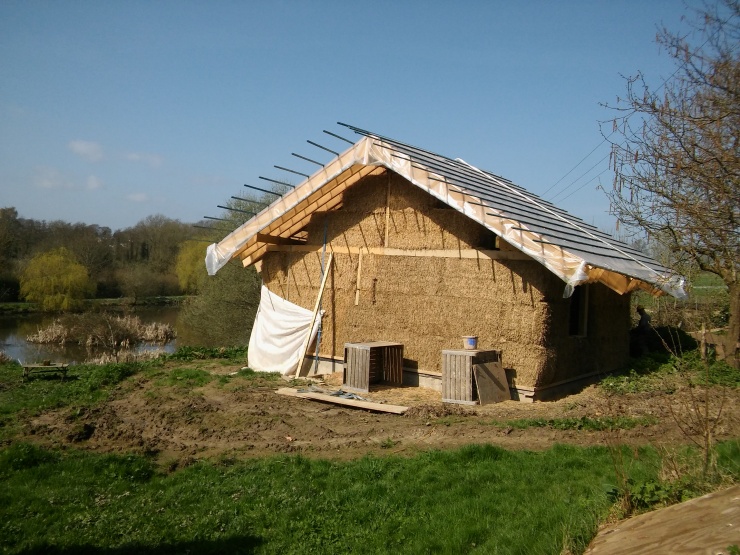 Here you can see that part of the end of the house has been sprayed with the clay.

Putting the tools away at the end of the day! Ollie, on the right came up from Brighton for the day to give us a hand and Edward, on the left, was with us for a week.

Here you can see different mixes of clay and sand as well as some with chopped straw and cow manure. They were left to dry and checked for cracking and strength so we have the right mix for rendering the walls.