In the middle of June we had 10 students, at a time, from Class 9 of the local Michael Hall school to help with the building. They came for a couple of weeks so we took a break from the roof in order to start rendering the straw bales inside and out. Unfortunately we are not able to share pictures which include the students. The week after this, four of my old classmates from when I was at school came camping for a week and also helped with the rendering!

Inside we used a clay based render or plaster which we mixed as we needed it. We used the clay slip Terry had made earlier with our subsoil, which had dried out to a very thick consistency whilst sitting in the 1 ton bags . It was made up, by volume, of 2 parts (buckets) thick clay slip, 3 parts sand and 0.5 parts cow manure and it was mixed thoroughly in a forced-action mixer. We then took 2 parts of this mixture and mixed it by hand with 1.5 parts of chopped straw, as the machine clogged up if straw was added. The hand mixing is the hardest work.

The straw bales are first sprayed with a clay slip and if it has dried with a second coat so that it is wet when applying the render. Handfuls of the render are then pushed hard onto the wall in a thick layer, at least one inch thick (25 to 30mm) and then floated ‘level’ with a plastic or wooden float.

On the outside of the building, where rain can reach the walls, we used a render made from lime putty. On the top part of the wall protected by the overhang and on the wall covered by the firewood store we used the same clay render as inside the house.

The lime render is mixed in the machine and made up of 1 part lime putty (bucket) to 2 parts sand  and the mixture mixed by hand with chopped straw, (2 parts to 1 part of straw). When using the lime render it is necessary to use rubber gloves as the lime can burn. Goggles are also used when working with the runny putty to protect the eyes.

The lime render is put on the straw bales in a similar way as the clay based render and smoothed afterwards with the float. The clay render is allowed to dry as quickly as it wants but the lime render is kept moist for a number of days by spraying it with water as it shouldn’t just dry but ‘cure’ in a chemical reaction. This reaction needs oxygen which is taken from the co2 in the water.

Ben and Terry with the forced-action mixer.

Peter at the ‘table’ we used for mixing in the straw by hand. 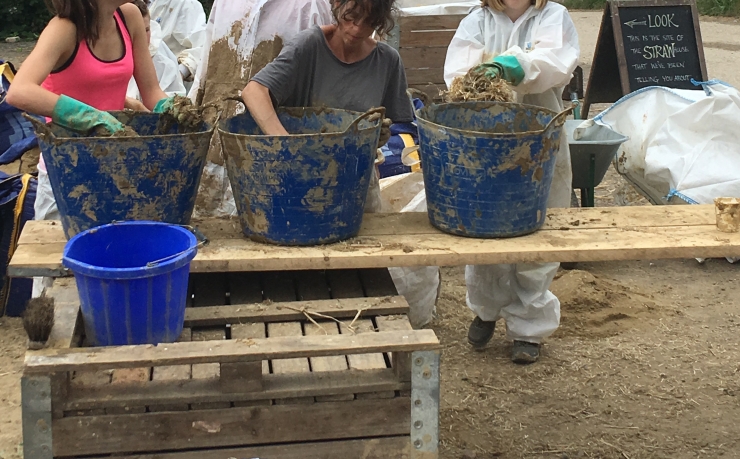 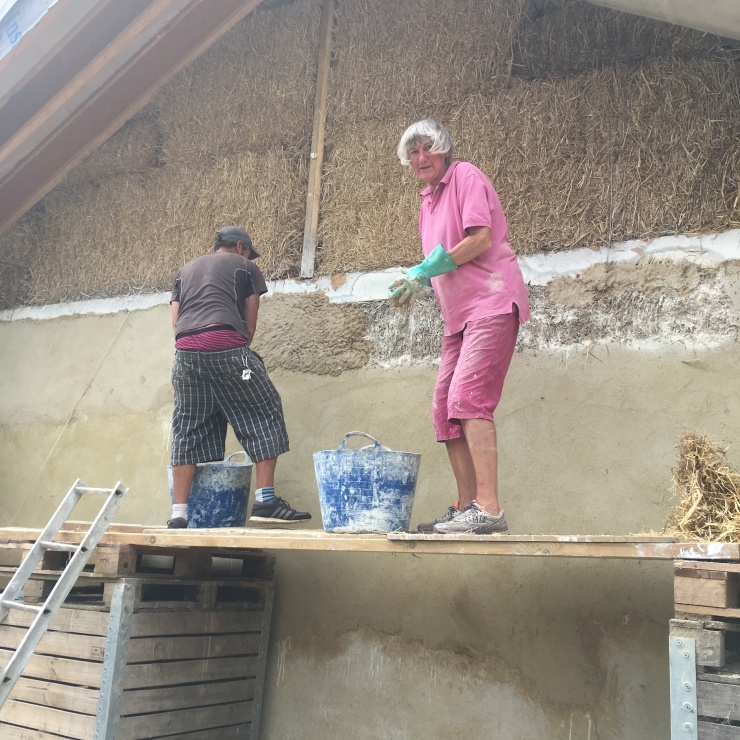 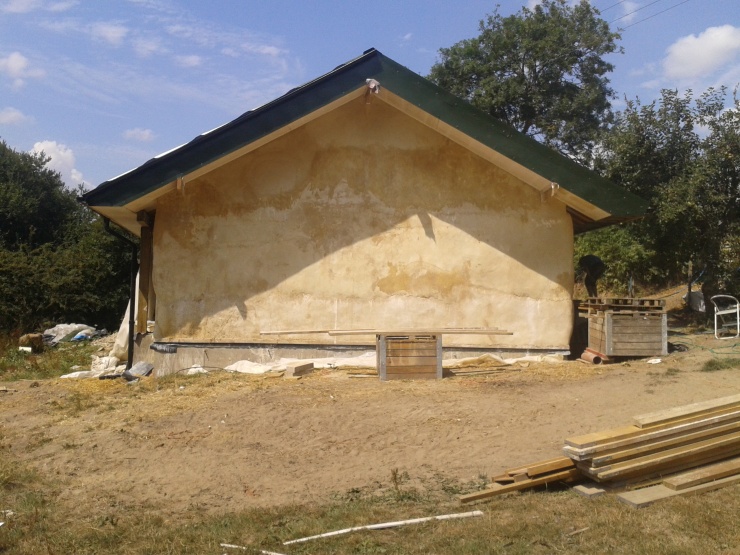 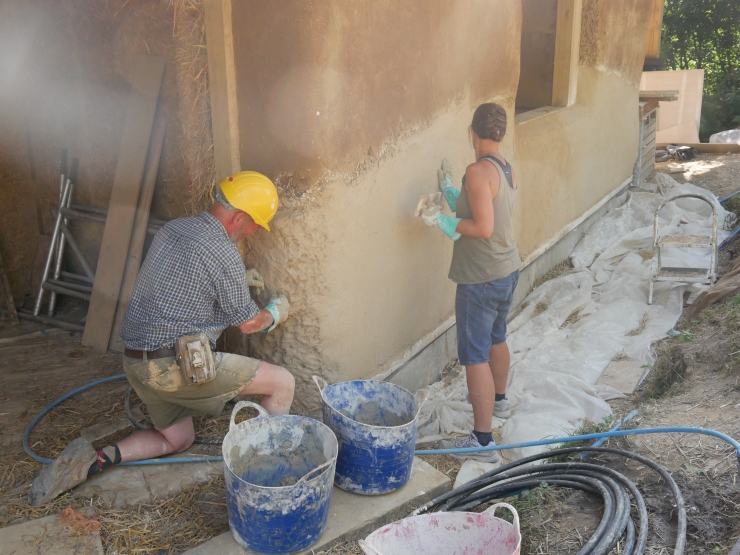 Here you can see the top part of the wall is clay render where it is protected from the rain by a large overhang, and below is the lime render, which is being worked on. 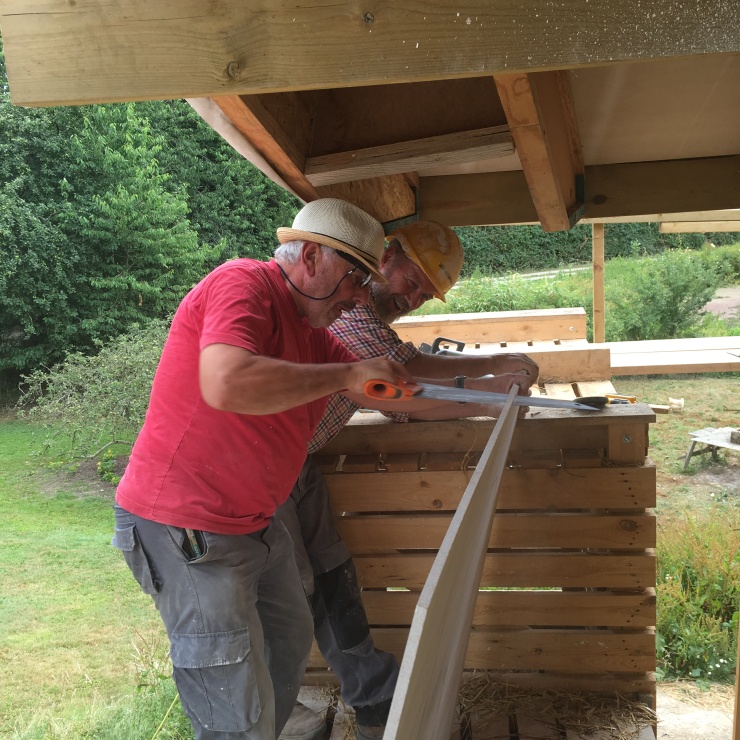 Soffit boards have to be in place at the top of the walls before putting on lime or clay render. Clive trimming a piece to fit.

Clay render in the lounge. 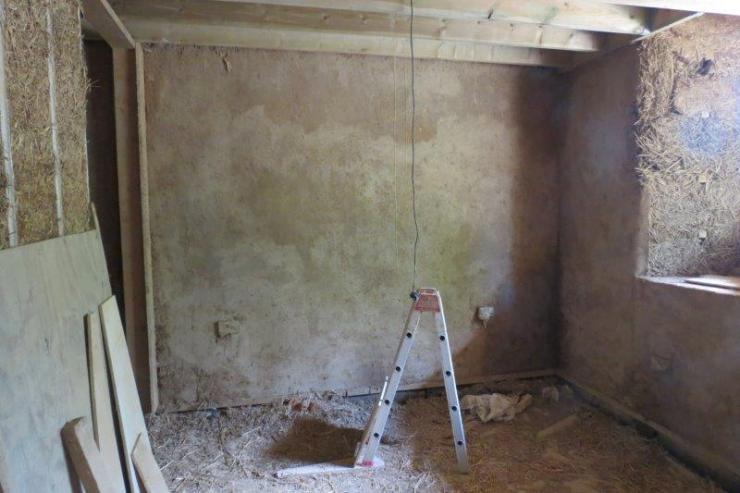 and the other one.

Floating the edge of the clay render.