Having cut the rafters to length and strengthened the ends we want to put the bales on the roof between the rafters in order to insulate the roof well. Before we can do this we need to fill in the triangular gap between the wall plate and the rafters with the mixture of straw and clay slip which we used for the internal walls. See the photos below.

Then comes the bales. Between the bales and the rafters there is a gap, due to the ‘I’ beam shape of the rafters, which needs to be stuffed with straw using a stick and hands. This is to ensure the best possible insulation effect.

Then, instead of putting on the clay render on the bales as originally planned I have gone to the expense of buying more magnesium oxide boards to lay over the straw and rafters. This is because of the lack of volunteers to do such a big job as it is quicker and easier to use the boards.

Over the boards is then unrolled a Tyvek membrane used by roofers. This allows any moisture to move through it from below but should stop any water from above going through and it will run down to the gutter instead. I am not expecting the tin roof to leak, which will be screwed on top, but there is likely to be quite a lot of condensation dripping from it at certain times. In order to give plenty of airflow going up under the tin we are nailing on 25mm battens up the roof above the rafters, before fixing on the 47mm timbers horizontally to which the tin sheets will later be screwed.

It is, of course, crucial that the bales in the roof never get wet! Should that happen they will become extremely heavy which would put a tremendous strain on the roof, particularly  on the battens holding up the bales.

Here you can see where the ‘triangle’ needs to be filled in with clay-slip straw above the wall plate. You can see here that we have also put in noggins between the rafters to hold them firmly upright.

Here Fabian is putting in the straw clay-slip 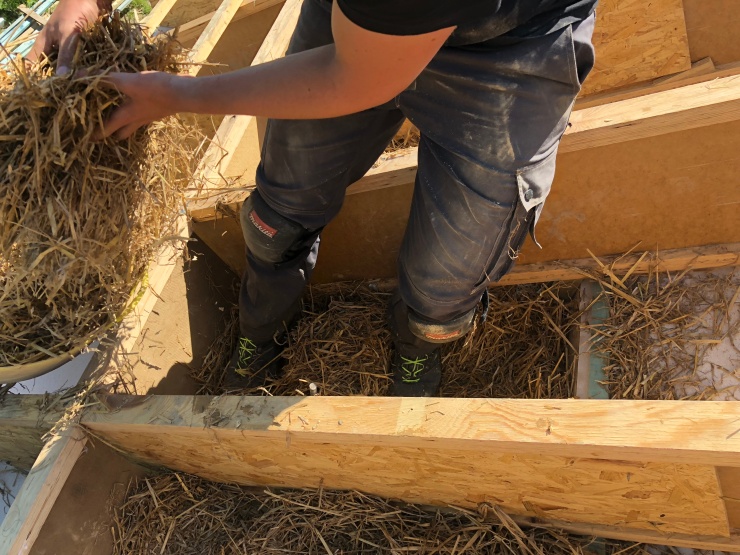 and firmly stamping it in.

Here you can see straw bales sitting between the rafters before they are covered by the white magnesium oxide boards and then the Tyvek.

Here Fabian is peeling off the paper covering the special sealant we put on each batten before nailing it onto the Tyvek. This will ensure that no water goes through the membrane when the nails are put in. 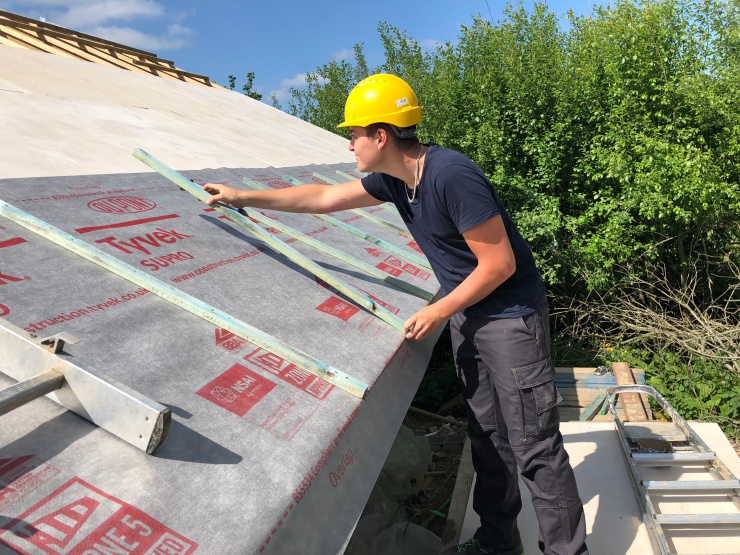 Fabian is lining it up with the rafter underneath before nailing it on. We always use short lengths of batten so that when we role out the next length of Tyvek it can overlap the lower one by 150mm. (there is a dotted line which shows us where)

Fabian is from Switzerland and is a very good worker and happily is with us for four weeks!

Here you can see more lengths of tyvek have been rolled out and also the horizontal 2×2’s to which the tin sheets will later be screwed. 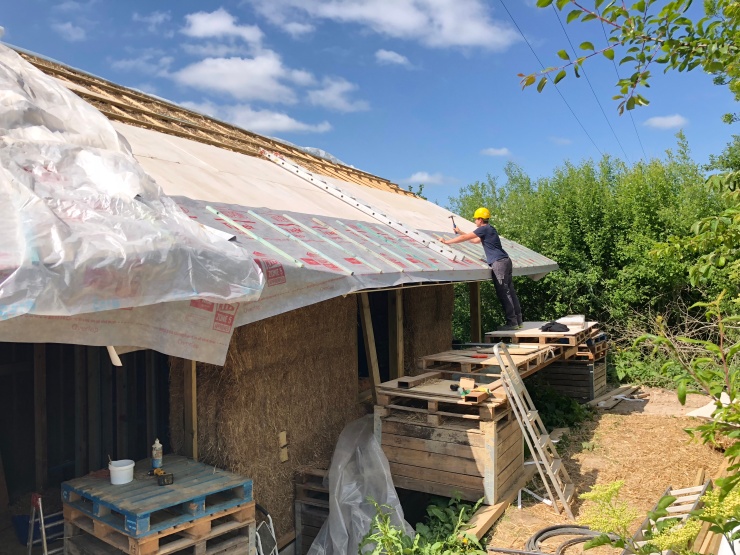 Here you can see that we have not put the straw bale insulation over what will be the firewood store.

This is a picture of the south side of the house. Due to the slope of the ground the roof is much higher from the ground here and so we have constructed a good solid scaffolding using potato boxes, which will not be needed by the garden for some time!

Here Margy, who was with us for a week, is fixing on some wooden pieces to strengthen the ends of the rafters and to give us something to screw the fascia boards onto etc. 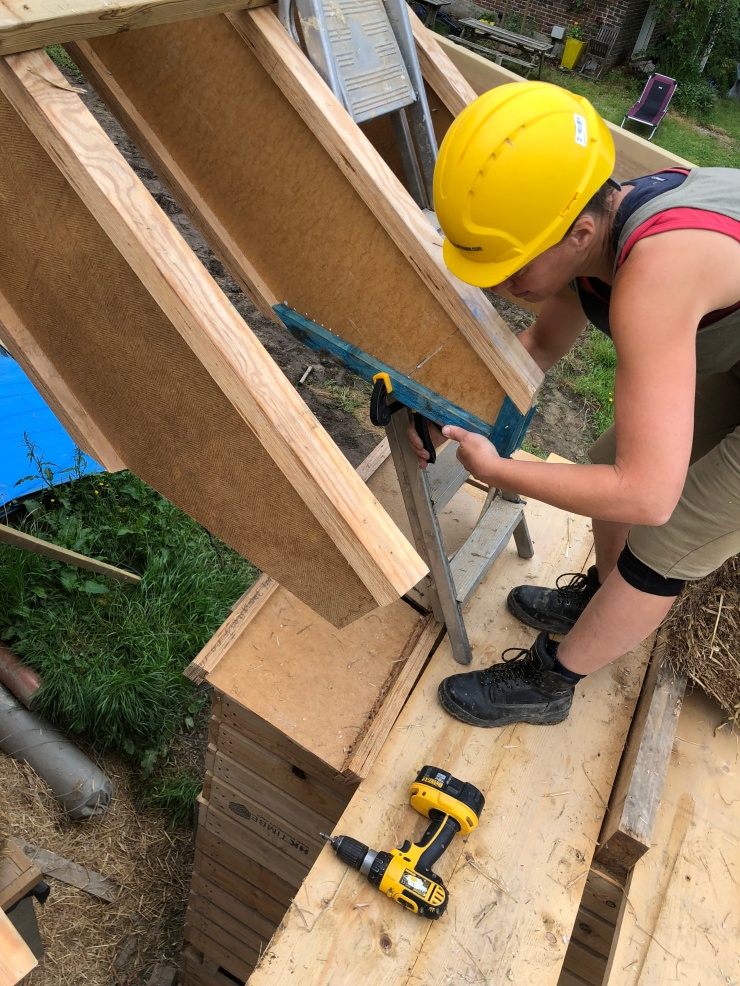 Margy also measured, cut and screwed in place all the noggins between the rafters.

Meanwhile, inside the house Guy and Ula are fixing on some board above what will be the large south facing windows. This is so that we can stuff some straw behind it to insulate the room even better. 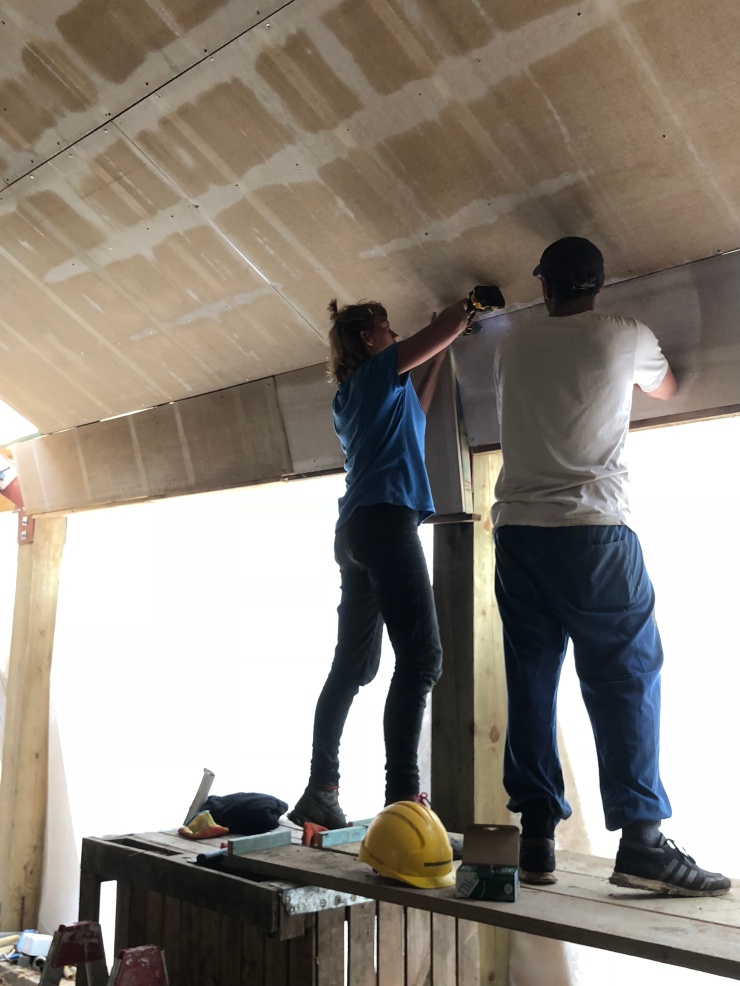 This was Guy’s third day with us, while Ula was with us for just the one. They made a good team!